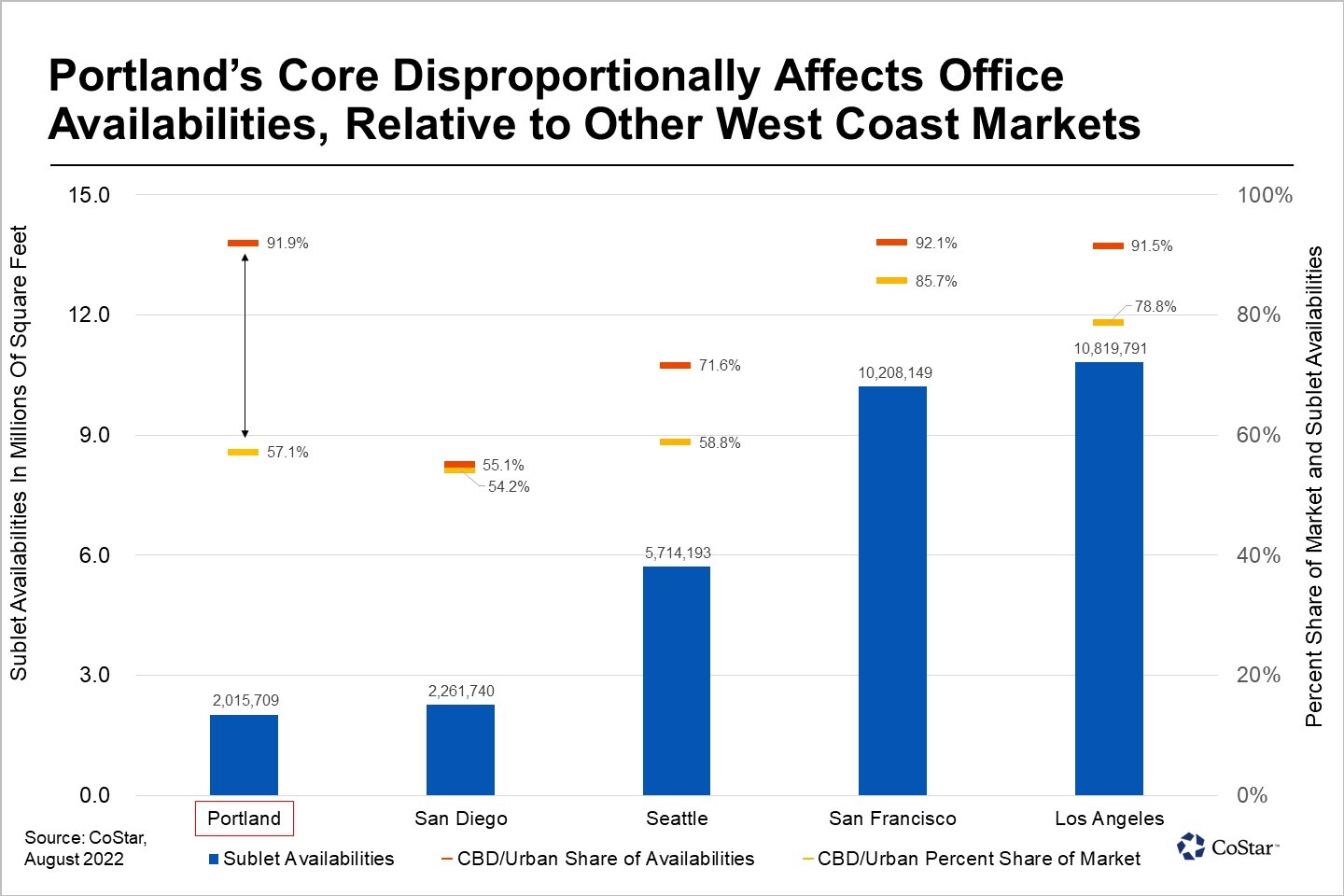 Though earlier in the year it seemed as if the tenant exodus from central Portland was slowing, it now appears that tenants are hesitant to come back or sign on for space in downtown Portland and neighborhoods nearby. When analyzing location type for office properties – which describes the location context of a property as it relates to real estate density – Portland’s downtown and urban areas continue to underperform their suburban counterparts.

On its own, the number can be unassuming, given denser areas of larger cities tend to be the primary hub for office space and thus the primary driver in market health. However, while Portland’s central business district and urban locations have historically acted as office hotbeds for the Rose City, these area’s account for only 57.1% of the total office footprint. This figure is relatively low compared to other West Coast gateway markets. Sublet availabilities in denser areas of San Francisco and Los Angeles, for example, also account for over 90% of the total availabilities in those markets, but urban and central business district locations in these metropolitan areas also make up a much larger share of these regions’ total office inventory.

This divergence from the peer set illustrates that areas of the Portland region that once bustled with office activity have – at least temporarily – fallen out of favor with tenants.

Why is that so?

Some local stakeholders and market participants point to prohibitively high tax rates and Portland proper’s ailing reputation, which has suffered from rising crime rates and homelessness in the wake of civil unrest that rocked the city during 2020.

Muddying the water even further are indications that, despite office struggles, downtown appears to be recovering in other sectors. Apartment occupancies have risen nearly 600 basis points since late 2020 and Google’s Mobility Index – which tracks data for resident movements, relative to a pre-coronavirus pandemic baseline – shows a rise in visits to places like parks and retail areas. 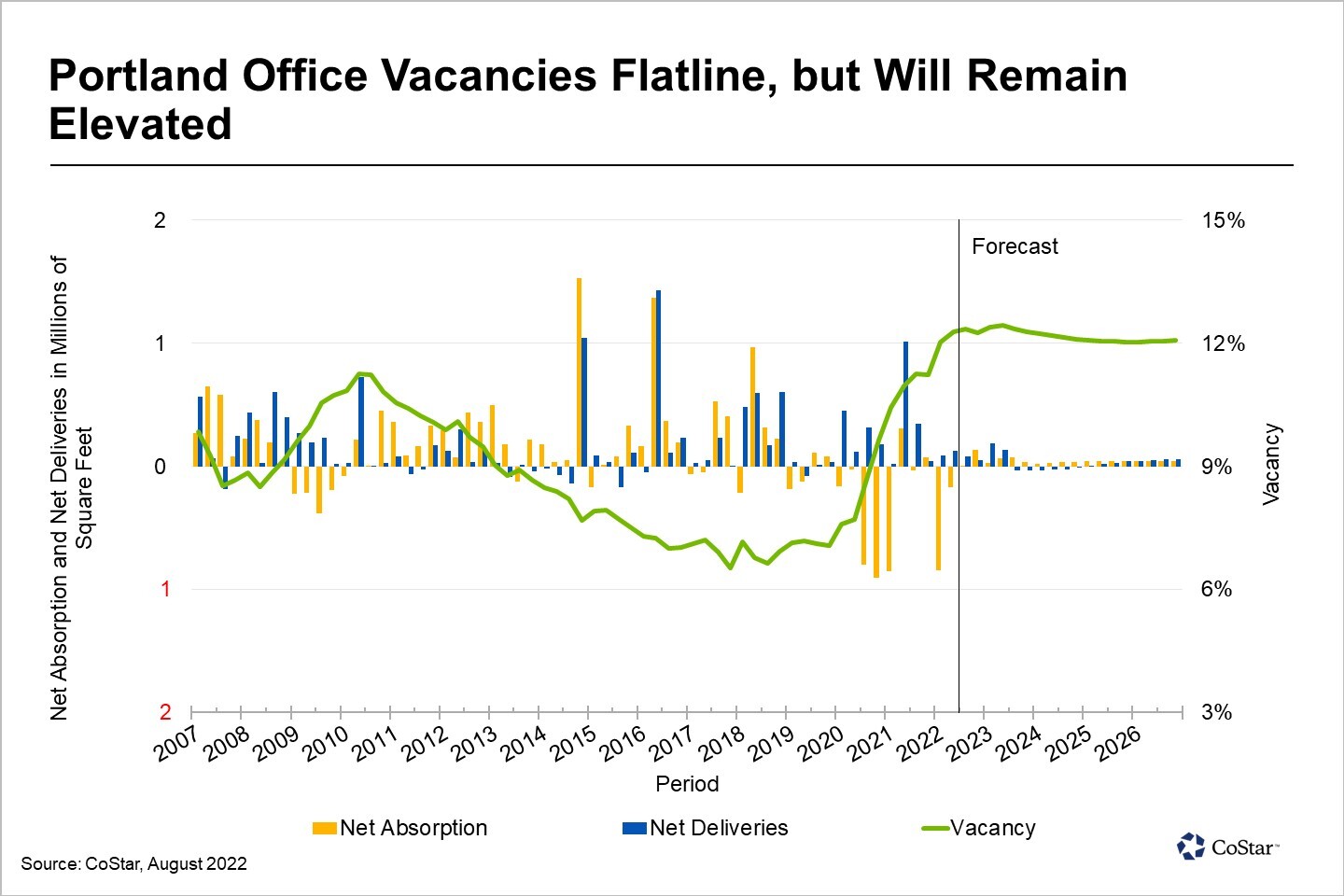 In short, residents are returning, but employers are not, at least so far. Thus, it is possible that one of downtown Portland’s main draws in the past — proximity to work — is perhaps no longer the driver of office demand it once was.

Another item to consider is Oregon’s COVID-era restrictions, which were kept in place for an extended period. Officials only recently lifted indoor mask mandates, making Oregon one of the last states in the country to do so. This could have a lingering effect on business mentality and policy in the near term and contribute to a lag in office return.

As such, aside from a few well-performing assets boosted by technology and government leasing, it seems that every large office lease in the central business district over the last year has been countered by news that another large tenant is leaving. Umpqua Bank, for instance, announced recently that it will leave its flagship office in downtown after its impending merger with Columbia Bank. The newly-combined companies will set up a new office in Lake Oswego, a suburb about seven miles south of Portland. In addition, Portland General Electric will downsize its location at the World Trade Center and Unitus Community Credit Union will eventually leave its headquarters in downtown Portland for the western suburbs in Washington County.

These announcements come as more bad news for Central Portland and will contribute to stubbornly high vacancy rates over the mid-term. Fortunately, the region isn’t in the midst of a significant supply wave, so working through all the sublet space will be the market’s chief concern in coming quarters.

CoStar’s base case forecast – which has taken into account the rise in remote work popularity – indicates vacancies should begin to flatline soon, given a general lack of supply in the pipeline. However, rates will likely remain near record levels of 12% for some time.