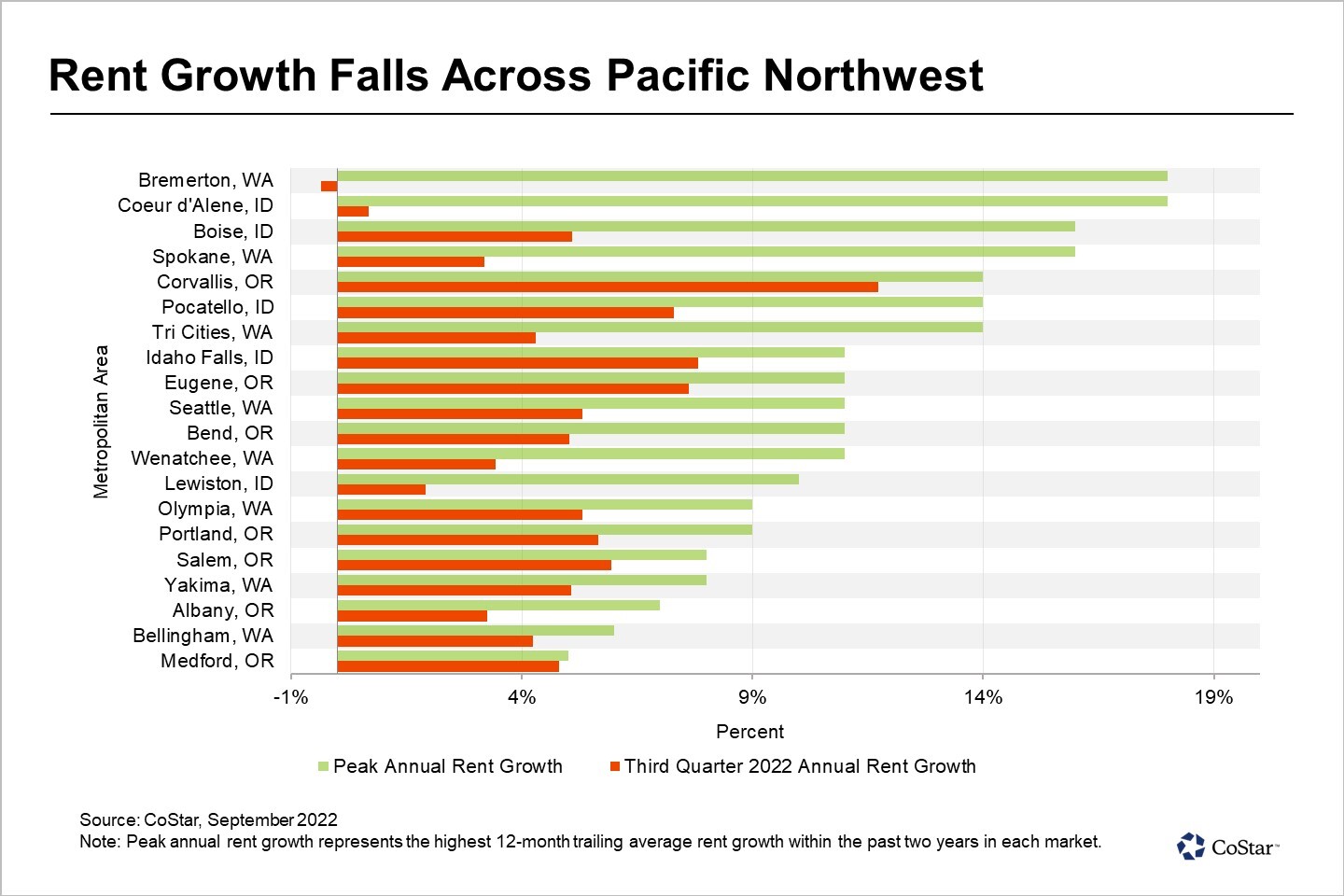 October 4, 2022 | 2:09 P.M.
Many areas in the Pacific Northwest that saw the greatest increase in apartment rents last year were located in smaller secondary markets that saw an influx of remote workers from major coastal cities. Sometimes referred to as ‘zoom towns,’ these typically scenic places experienced a surge in housing demand from remote workers freed by the pandemic to work from home long term. Often lacking the available units to support such a rapid increase in renters, these areas saw a drastic uptick in rents.

Responding to the rapid influx, developers kicked off a wave of construction to meet this surging demand. Unfortunately, much of the new apartments are being completed just as demand tapers off, creating an imbalance where more available units are chasing fewer renters.

Larger cities such as Portland and Seattle saw a sharp drop in apartment demand and slowing population growth overall at the onset of the pandemic. The trend has since shifted, and population growth is once again returning to those areas, primarily though in-migration from other cities. This boomerang effect led to a surge in apartment demand in Seattle and a smaller uptick in demand in Portland, particularly in the central core, where the average occupancy has risen around 900 basis points to over 92% since the fourth quarter of 2020.

The current recessionary environment is helping to slow rent growth across the country, and the Pacific Northwest is no exception. And those areas with the highest rent growth figures last year are seeing the largest drops in rent growth in 2022.

As a result, the tides have turned on many secondary markets that saw incredible apartment rent growth in 2021. The Bremerton apartment market, which covers all of Kitsap County, is a prime example. This market experienced the greatest rent growth in 2021 in the Pacific Northwest. As of the end of September, it is also the only one in the Pacific Northwest to see average apartment rents fall year over year, even if by just a fraction of a percent. For comparison, Kitsap County’s peak trailing 12-month rent growth was just over 18% in the third quarter of 2021.

Coeur d’Alene will continue to face challenges in the near term with about 1,500 new units expected to hit the market before the end of 2024. This means that inventory will expand by 22% during the next 30 months. The dynamic of a large retiree base inundating the metropolitan area, coupled with a vast leisure and hospitality payroll, also affects apartment demand here. Retirees moving to the area almost exclusively seek out more expensive single-family residences, and employees in the tourism sector do not necessarily need to live in Coeur d’Alene proper, with nearby Spokane offering more housing options to choose from. And while Coeur d’Alene’s population growth over the long term will almost certainly outpace national trends on a percentage basis, the outsized gains seen in the last two years appear set to moderate to the downside.

Meanwhile, the slowdown in rent growth in the region’s largest cities has been modest by comparison. Seattle’s rent growth peaked at 11% at the start of this year and is now just over 5%. Portland’s peak rent growth was 10%, which held steady from the third quarter of 2021 through the first quarter of 2022. Annualized growth there has dropped to just shy of 6%.